Symptom: There are three symptoms that could be reported as follows.

Solution: There is both a change to the Arecont camera web page and a March recorder patch needed to correct this problem. The first step is to uncheck the “Extended” box on the Motion Detection tab on the Arecont camera web page. See screenshot below. If the problem persists install March recorder patch p/n 34997 (which is currently only available for 5.8.1.SP2 and included in the upcoming 5.9 release 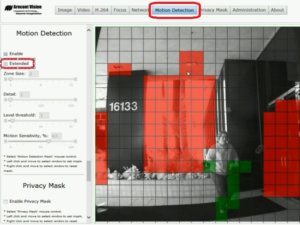 Details: The current March driver for the Arecont camera expects 64 cells. Enabling the “Extended” option increases the grid size from an 8×8 grid (64 cells) to 32×32 grid (1024 cells as pictured above). The result is that The recorder driver only detects motion for the first 64 cells – meaning only the top two rows of the screen.

Next Steps: March plans support for a 32×32 grid in a future software release.

« Return to Support
Stay up-to-date on product and training news with our Certified Partner Communications.